OWith less than an hour of our arrival in Reykjavik, my son and I are walking barefoot through 6-inch deep snow, wearing only our bathing suits. A fierce breeze whips around us, quickening our pace towards the warmth of the Laugardalslaug pool and the steam rising from its surface. We make the last jump into the water hand in hand, shouting our joy under a rapidly darkening sky as cool flakes fall on our faces.

Much has been said about the adventure potential of Reykjavik. It is not only home to 17 geothermal pools, it is also a springboard for a series of exciting day trips. But what has caught less attention is the expanse of the Icelandic capital for adventure with children, with a wide range of activities for everyone. easily accessible ages in and around the city. A new Discover the World tour aims to clear that up, and 11-year-old Freddie and I were the first to try it. “Mum,” he says, sitting next to me in one of Laugardalslaug’s many hot tubs, melting an ice cube in 40C water, “I think maybe we’re too relaxed. » The calm does not last long.

Freddie was hopping with excitement the next morning when the guide from our first visit showed up at the hotel in a huge 4×4. Family travel company Superjeep customizes Ford Excursions with extra doors and 46-inch tires. Svavar Dor Ragnarsson, the Superjeep owner’s son, sits Freddie up front so they can talk about vehicle specs and horsepower (an impressive 600). As we drive out of town, it’s like Freddie is starring in his own personal episode of Top of the lineour guide giving Harris, Flintoff and McGuinness a hard time with his Icelandic brand of oil banter.

Our route is the scenic Golden Circle, which Ragnarsson approaches counter-clockwise to avoid the crowds. We pass herds of stocky Icelandic ponies huddled against the cold and the odd isolated wooden church, stopping first to admire the country’s famous hot springs. Freddie and I are repeatedly surprised by the 30m jets that shoot out of the Strokkur geyser, bringing with them a sulphurous stench, and particularly enjoy throwing snowballs into the boiling pools surrounding it. The nearby Gullfoss waterfall was saved from industrial development thanks to the activism of local woman Sigridur Tomasdottir. During the winter, parts of its double cascade are plunged into icy stillness, as if Frozen‘s Elsa has taken over the job of protecting him. By far the highlight of the trip, however, is when we leave the tour buses and head off-road through the Kjolur Plateau, which sits between two glaciers. “I’m a big fan of time-consuming shortcuts,” Ragnarsson says with a smile. The car’s huge tires make it easy to drive, gliding effortlessly through conditions that have led other motorists to abandon their vehicles to drifts that won’t back down until April or May. Rolling down the car window, we see that there is nothing – literally nothing – but snow as far as the eye can see, its surface shimmering dazzlingly white. Nowhere is the wild nature of Iceland more apparent. It is a country the size of England, with a smaller population than Reading. “It’s amazing how beautiful nothing can be,” says Ragnarsson. Iceland’s breathtaking views seem somewhat lost on Freddie, but he loves interacting with the landscape (in other words, making snow angels).

Ragnarsson is less enthused about his country’s infamous national dish, hakarl: fermented shark. “Open a tin can and it’s like you’ve been slapped,” he says. “Somehow, though, the taste is even worse.” Instead, he directs us to a local specialty that’s much easier for kids to win: hot dogs. Back in town, we take Ragnarsson’s advice and head to the little stall on Tryggvagata Street, Baejarins Beztu Pylsur, which has been serving Reykjavik’s signature all-weather snack since 1937. Its name translates to “the best hot dogs in town”, and we can believe it. . Made partly with Icelandic lamb and usually served with toppings such as ketchup, sweet mustard and fried onions, they are excellent. 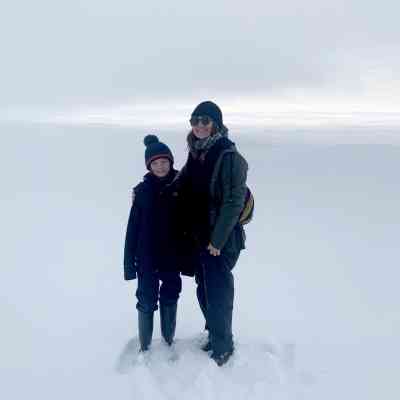 And at just over £3 a pop, it’s a bargain too. The country’s reputation for being incredibly expensive is well-deserved, but families will be grateful for Iceland’s kid-friendly street food scene. Reluctant to pay through the nose for a restaurant dinner my child might not eat, I make outdoor hot dogs a daily staple, devouring them next to picnic benches buried in snow. Winter does nothing to dampen the national enthusiasm for ice cream either, and the eye-catching Valdis Lounge offers some of the most original flavors. Just off Reykjavik’s main shopping street, Laugavegur, it offers creative versions of the classic chocolate cone as well as more unusual flavors such as rye bread or salty licorice, which looks suspiciously like a ball of cement.

Ice is also plentiful at Perlan, the country’s natural history museum, where the star attraction is a 100m-long man-made ice cave, built with over 350 tonnes of snow. After playing hide and seek in minus 15°C temperatures, Freddie and I check out interactive glacier exhibits and walk on pools where digital projections of sea life swim beneath our feet. Perlan is also the only place in Iceland that guarantees you a glimpse of the Northern Lights, the evocative images of which are projected hourly onto the vast domed ceiling of its planetarium. Some of Iceland’s most alluring natural attractions are inherently unpredictable – during our stay we tried both whale watching and the Northern Lights, but saw neither, alas – it is therefore advantageous to have thrills in our itinerary. On the other side of town, in the Grandi district near the old port, the new FlyOver Iceland attraction offers that in spades. Strapped in like a carnival, we hang, feet dangling, in front of a 20-meter-high screen broadcasting helicopter images of some of Iceland’s most remote places, giving the surprisingly convincing impression of flying over them. Facing a waterfall, the audience is doused with water, while meadows of wildflowers are accompanied by the floral scent of spring. We stagger back outside, disoriented, to embark on another escapade. Heading to one of the city’s ultra-punctual buses, we take a scenic route and almost immediately sink into thigh-deep snow. In Reykjavik, the most pedestrian journey can become an adventure.

Orla Thomas was a guest at Discover the World, which offers three nights’ B&B as part of a family adventure holiday from £518 pp, including transfers and a Superjeep Safari. She was also a guest of Fosshotel Reykjavik (islandshotel.is) and Play, which has returns from £250